Why Does My Dog Smell After Being Outside? Why and What To Do! 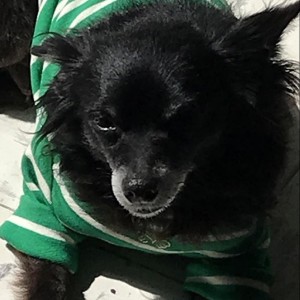 So, you’ve just been out for a lovely long ramble on the hills or in the park with your favorite little pooch. You’ve had a fabulous time and he’s been playing catch, ran through the fields, and burned off some energy.

We all know the story, you arrive at home, settle down to a hot drink and snuggle on the sofa with your best furry friend, and all of a sudden you get a whiff of something unpleasant.

What could it be? and why is it that your dog smells after being outside?

But first, let’s take a look at the brief takeaway answer as to why your dog sometimes smells when you’ve been outside.

Now we’ve looked at the short answer, so you can work out straight away what might be causing the smell, let’s look more closely at the kinds of scenarios that can bring doggy whiff into your life, some of the reasons why your dog smells and of course, the most important information as to how you can stop it!

So we can understand a little more about your furry friends, let’s start first by looking at what exactly dog odor is.

What is dog odor?

So we can better understand some of the smells your dog may emit, it’s useful to know that dogs don’t sweat in the same way a human does.

Dogs don’t perspire through their pores, creating perspiration as we do. However, they do sweat from their paws, and also they release a light type of perspiration from their hair follicles. It is within these follicles that provides the scent that is individual to each dog.

It’s interesting to understand that although dogs all smell similar to us, they smell completely different for one another!

One important way dogs produce scent is through the oil they produce which contains their own individual scent markers.

Although dogs all smell similar to us,
they smell completely different from one another!

Do dogs emit scent through glands?

Dogs also emit scent through their glands in their ears. This often can be a little like a mild yeasty smell, which is very normal for your dog and will be kept under control with regular grooming and bathing.

Dogs also emit an odor through glands in their anus, which is mostly intended for other dogs to help identify them, but if they become blocked, they can cause a health issue that you will need to get a vet to look at.

Now we’ve seen what’s a normal odor for your little furry friend, let’s take a look at some of the reasons your dog may smell excessively after they’ve been outside.

Let’s start with one of the worst smells your fur baby may bring home!

“One important way dogs produce scent is through the oil they produce
which contains their own individual scent markers.”

My dog has rolled in fox poop

For evolutionary reasons, dogs’ natural instincts have changed very little from their original wolf ancestors. Historically, wild dogs covered themselves in foul-smelling stuff so they could attack their prey undetected.

Interesting to know that dogs would often cover their young with poop to protect them from predators.

However, when you’re faced with your dog who has rolled in fox poop and smells after being outside, it can be an awful experience!

It smells horrendous and can be considerably tricky to get rid of the mess, let alone the smell from your dog.

It’s also been said by some dog owners that tomato ketchup is very useful in eliminating and neutralizing the odor. Apply the ketchup liberally then leave for as long as possible, up to 20-30 mins.

Or you could try mild, soap-free natural shampoos like our Bio-Groom N Fresh Shampoo which cleanses thoroughly without stripping the natural oils from your dog’s coat.

“dogs would often cover their young with
poop to protect them from predators.”

How to stop my dog rolling in poop

So, is there a way you can stop your furry friend from rolling in poop?

We recommend making sure when you’re in areas on a walk that you think might be frequented by foxes or any place your dog has previously rolled, that you keep them securely on the leash.

It’s useful as part of their training to teach them some basic commands such as ‘leave’ or ‘come’ so that you can entice him towards something more positive such as a ball or a treat.

Dogs always seem to seek out the smelliest things possible, such as your garbage! Generally, they’re hunting around for an extra snack or a treat and can sniff out the food smells.

They’re also rather partial to rolling around in garbage too, so make sure you thoroughly secure any garbage cans tightly shut and don’t leave any bags of leftovers anywhere your pooch can sniff them out.

So although we may struggle to understand why a dog would choose to roll around the remains of a dead animal, it is one aspect of canine behavior that dogs will often do.

Sometimes they may also eat the dead animal too, which although it appears unsavory to us, you can be assured it is just a usual part of canine behavior.

If your pooch has found such remains, it can be another way your dog will arrive home from a walk with an unattractive smell!

As your furry friend relies totally on his nose to discover the world around him, he will certainly pick up the scent of a skunk that has been in your area, such as your backyard or on your daily walk.

So even if your pet has not actually been sprayed by a skunk, he could still smell of the odor. Unfortunately, a skunk’s scent can form a really strong bond with your dog’s fur coat.

If your dog is playing or walking in any area that a skunk inhabited and rolls around in that area, the skunk’s scent can very easily bond with your dog’s fur coat.

“So even if your pet has not actually been sprayed
by a skunk, he could still smell of the odor.”

How do I get rid of smells when my dog has been outside?

So now we’ve taken a look at some of the nasty smells your dog may pick up on his daily walk, let’s take a look at the best way to remove them.

We hope this article has helped you to identify some of the reasons why your furry friend may have returned from a walk, or been outside in the yard and might smell!

Making sure you bathe your dog effectively will help to remove the odor and make your fur baby fresh and clean again!

Don’t forget to check out our store for lots of ways to keep your pooch and your home smelling beautiful and without any nasty odors or smells.

We have a huge range of grooming products, including baths, shampoos, colognes, and even an amazing grooming kennel to make sure your doggie always smells divine.

How To Clean a Dog Crate, Best Hints, and Tips!

Back to all However cute and cuddly your furry friend

How Do Dogs Get Fleas in Winter? Here’s What To Do?

Back to all It can sometimes feel like a constant

Are you choosing the right clothing for your dog?

Whether you choose to dress your dog for protection from

Although every reasonable effort has been made to ensure the accuracy of the information contained on this site, absolute accuracy cannot be guaranteed. This site, and all information and materials appearing on it, are presented to the user “as is” without warranty of any kind, either express or implied.